I believe I am understanding you better than ever. Based on the number of likes and the comments on my previous two posts (here and here), you are “a bunch of” romantics too. 🙂 So I thought I’d finish this week on this note: it may interest you in much the same way.

Have you seen this? I shared yesterday on Instagram that I’d I read that a previously unpublished Ernest Hemingway 1956 short story is being published for the first time. It appears it’s *way* different than anything we’ve seen of his before.🤔

In this one, okay, now, apparently his narrator – who bears nooooooo resemblance at all to Hemingway – and others are drinking wine and talking about war in a hotel bar… and (wait for it, because you won’t believe this, really) they’re in Paris.😉😁🇺🇸🇫🇷

A previously unpublished Ernest Hemingway story about Paris after its liberation from the Nazis is finally being released. https://t.co/lYv8cBjRdu

I know. Amazing, isn’t it? The Associated Press explains:

“A Room on the Garden Side” takes place in the Ritz hotel (Hemingway liked to say that he liberated the Ritz bar) and is narrated by a Hemingway stand-in called Robert who shares the author’s own nickname — Papa. Robert and his entourage drink wine, quote from Baudelaire and debate “the dirty trade of war.”

By the way, “Robert” is also an excellent name for a main character.

I’ve discussed Hemingway on here before. Anyone who writes – especially, men – cannot fully escape his influence. Jokingly we used to call my (now late) uncle – who was a crime novelist – “Hemingway.”

In the summer of 2017, after Conventions: The Garden At Paris was finished and finally published, I decided to try a change of writing direction. I would write a romantic travel (there’s another shocker, I know) short story set in the current day. I thought I might publish it – along with maybe one or two other similar shorts – as a collection only for the Kindle.

However, within a month or two the idea blew up in my face. What I had ended up writing was, uh, not very good – and that’s probably being kind. I have since filed it away inside of my PC; I have even considered deleting it, but I always step back from that edge of no return. While I can barely even look at it again because, frankly, I am embarrassed by it, maybe someday I will return to it and attempt to make it publishable.

Most definitely I don’t want anyone else to read it as it is. What is published is what is meant for the world to see. So certainly I DO NOT want that story published after I’m dead. [NOTE to anyone – especially family or friends who end up with my PC or papers – if you find it after I’m gone: I swear I’ll come back from the dead and haunt you if you publish it.]

Following that short story (thankfully, private) debacle, and a further several months’ break to clear my head (the longest span in five years that I had not written much of anything), although I had not planned to when I wrote Conventions, I began to plot out another novel that followed along similar lines. Thus the one good that came from it. Thanks to that dire short story, I realized once and for all that – first and foremost – I write novels.

I suppose because I like characters so much, I also find short stories just too limiting; they don’t give me the space to develop the people. There simply isn’t the time in less than about 20,000 words. The characters end up thin, or just symbolism.

With a full novel, though, they can be so much more… 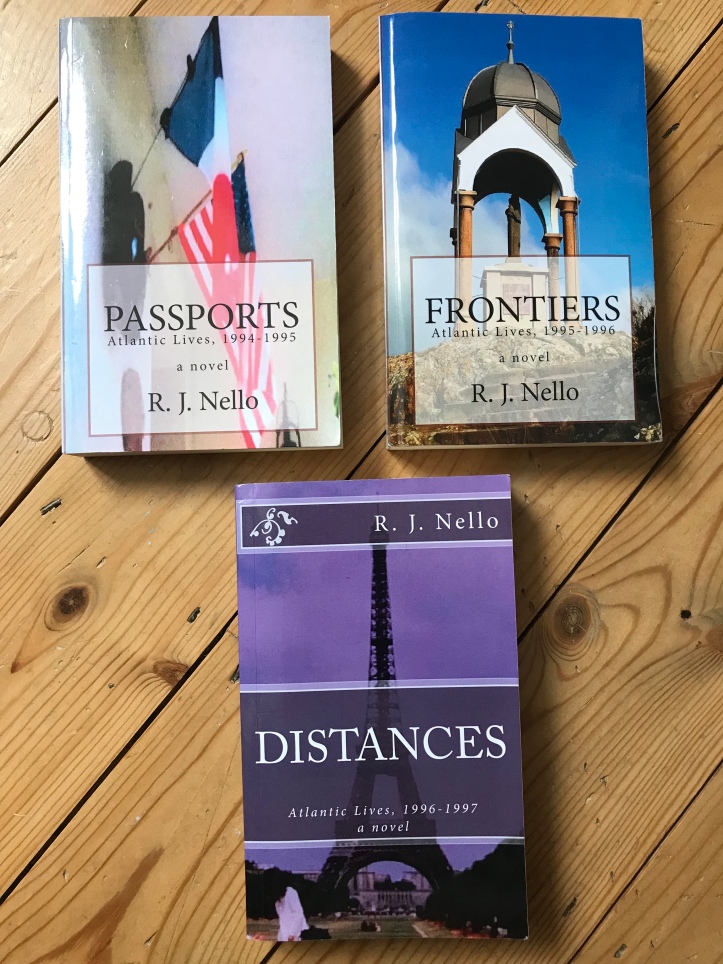 “James” is not a bad name for a main character and/or narrator either. Having done it the other day for Conventions, I thought for some additional fun I would do the same for my earlier series. I would present character “briefs” here in one place.

So, Passports, Frontiers, and Distances: here we go:

There are other important characters, of course. However, those there are the main ones with whom it all starts. And they are around, more or less, for all of the books. Time never stops. There is “A Room on the Garden Side.” There may be also, we might say, “A View from a Park Bench”…

Where will we all be in 2036, eighteen years from now? Do we want even to think about it? Shall we hazard a guess or two? (“President Kim Kardashian has just returned to the White House today after a grueling series of NATO meetings in Brussels…” I no longer rule anything out.)

Unlike for Conventions, in which most of the fictional characters are more a “mishmash” in my mind than based on any “one” or “two” actually living, or once living, people, I could pretty much tell you point-blank precisely who every one of those fictional characters above is based upon. “Fiction” is almost never entirely “fictitious.” As my uncle once told me: “Fiction comes from fact, and lots of fact makes great fiction when you re-write it as fiction.” (I want that in my obituary. 😉 )

Have a good reading and writing weekend, wherever you are in the world. 🙂