While the story begins inside of James’s mind, without Isabelle there is no novel. On that September Thursday in 1994, she is the first character to speak. She breaks the ice….

Walking into her University of Long Island (ULI) Western Civilization class for the first time, Isabelle scopes out the seating. On one side of the room, several American girls – who seem already to know each other – are spread out and talking. On the other side, she spots a good-looking, apparently slightly older guy, sitting quietly by himself.

He seems to be skimming a book. Isabelle sees him glance up at her, and she thinks he appears embarrassed for a second – almost as if he had hoped she had not seen him looking at her. Noticing the empty desk in front of him, she guesses he wouldn’t be unhappy if she sat there.

She smiles lightly as she heads toward that desk. After reaching it, sitting and organizing herself, she decides to spin around and have a chat with him. Irritated also that her roommate is proving not nearly as friendly as she had thought an American girl would be, Isabelle decides to open by unburdening herself. She sighs and grumbles:

“I am tired already. I don’t like my roommate. She is sooooo difficult.”

But his immediate reaction, while pleasant, is oddly restrained and not the outgoing one she had expected. Maybe he’s just shy? She introduces herself.

He’s James, he replies, and follows with a weak effort at humor about not being confused with a famous secret agent character. Names now exchanged, and she explaining also that she’s French, as they talk she feels he is slowly becoming more at ease. And that is what she wants.

She had been born and raised outside of Lorient, Brittany, not far from France’s Atlantic coast. All of her life the U.S. has been an overarching and powerful presence looming over the horizon figuratively as well as literally. Indeed American soldiers in their millions had of course also been in France fighting Hitler’s vicious soldiers fifty years before during World War Two, and her older relations – her grandmother especially – had shared with her tales about those Americans they had encountered. 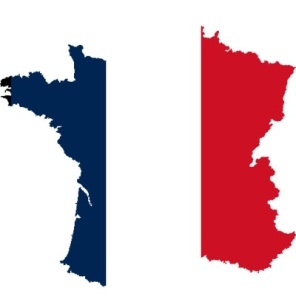 Culturally, the U.S. is impossible to ignore also. She had learned English in school not because they spoke English in England, but because they spoke it in the U.S. Its books, TV, films, and music were everywhere. In fact many of her favorite singers are Americans – even if she can sometimes still just barely understand what they are singing about.

Everyone she knows at home has opinions about the U.S. Some are positive ones, some negative…. and some extremely negative. Virtually no one is indifferent about it.

She had grown up hearing also about Americans being like adult children in not wanting to understand the world and in believing their country is always right. Yet she has known some Americans in Paris who were lightning quick to harshly criticize their U.S. to any French who would listen. They seemed also to admire and praise France almost too much. Often they appeared to like France more than she did!

Her only first-hand U.S. experience prior to landing at JFK a few days earlier had been when her parents had taken her to Florida for a vacation when she was sixteen. Now, at 24, she has a chance to learn about it entirely on her own. As they await the professor, she explains:

“I wanted to stay for a while and I thought I could be an au pair. But my father said, ‘Non!’” She mimicked his dismissive circular right hand wave.

James asks why he had felt that way?

“Ah, he did not want me watching the children of strangers,” she went on. “My father! So I asked my parents to study in New York for a year. That they thought was better.”

Although she had missed out on being an au pair, Isabelle was genuinely amused by what she had been told of Americans’ attitudes towards those young – usually European – women hired by affluent families to look after their children for a time. Her friend, Virginie, with whom she had concocted the au pair plan, had in the end flown to America on her own – and to work in, of all places, given her name, Virginia. Nearly a year later, Virginie returned to Lorient overflowing with stories (some good, some decidedly not) about her experiences in the U.S., including about her employers…. and their “snobbishness.” She tells James lightheartedly:

“They did not want just an au pair. Oh, no, Virginie thought it was very funny they wanted a French one! They wanted to be able to tell their friends, ‘Welllll, you knooow, we have a Freeeench oh peaaaiiiiiir,’” Isabelle observed in an extravagant, apparently southern, accent.

As class finishes, she hopes he wants to chat more. He does. While walking to the student center café together, and then while relaxing there over her coffee and his soft drink, she offers more about herself and her family. James also shares more about himself, bits about the immediate area where the university is located, and a few facts about Long Island also – such as the reason for the names of some of its towns and villages:

“My family’s from Queens. You probably never heard of East Setauket. That’s where I grew up, out on the island. Electrifying, isn’t it?”

“How do you say it again? You are right, I never heard of it until now,” she laughed.

“It’s the name of an Indian tribe that lived there. Long gone now,” he explained. “Well, it’s a corruption of it. Lots of places on the island are named after Indians. If you can’t say it, it’s probably Indian.”

Isabelle smiled. “My father has a map of America before the Europeans. It has all the Indian tribes on it. Where they lived.”

“He probably knows more about the Indians than I do,” James confessed. “But if his map has the Setalcotts, I’d be shocked.”

Overall Isabelle is impressed by him. Taller than average herself, she’s pleased James is rather taller than she is. And not only is he fairly handsome, but he has nothing to say about a wife, a girlfriend, or kids.

He has never been to Europe; but he also seems an American who neither hates France, nor one who adores it to the point of ridiculous. She suspects what he wants to ask her as well, but it takes him ages to get around to it. So when finally he suggests that perhaps they could spend Saturday in Manhattan with a couple of his friends, she jumps at the chance….